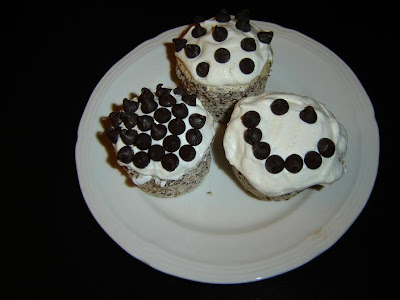 I was not planning to make this cake initially. But I had a lot of egg whites in the freezer - enough to make 3 angel food cake. I didn't have angel food cake pan though, and not sure of getting one, what with lack of storage space and the fact that I don't see a lot of angel food cake in my future. So last week I decided I would make this in cupcake form.

The whole process was pretty uneventful. I whipped the egg whites (add cream of tartar and sugar), then sift flour and fold the batter. I did not use Wondra Flour, instead my usual combo of 80% of unbleached AP flour and 20% of cornstarch. Then fold in the grated chocolate - I didn't have enough unsweetened chocolate, so I used some bittersweet chocolate.

I only have 1 6-cavity silicone cupcake mold so I had to bake several batches. One thing to note is that I thought since I'm using silicone mold, I don't have to grease the pan. Wrong. It was hard to wash it it afterwards :(. The next batch I spray the pan with baking spray, and that helped.

For the frosting I opted for plain whipped cream with vanilla and then top it with dark chocolate chips. The verdict: I was glad I made it. This cake is really good! It's very light and fluffy and it made me think of light vanilla chocolate chip ice cream. The batter (uncooked) even taste like ice cream to me. Hmm.. now I know what to do with the rest of egg whites sitting in the freezer. 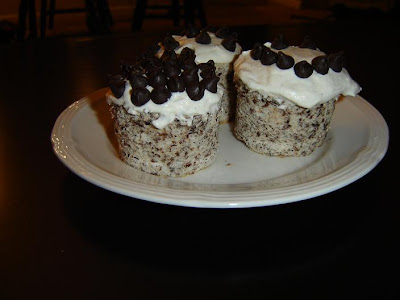 I have never heard of this cake before and was very curious as to what it would taste like. The idea of a cake that is soaked in 4 different kinds of dairy mixture sounds so odd. I was so intrigued that I made the cake a week ahead :).

The cake itself is easy to put together. Combine eggs, sugar, vanilla, and salt and whisk over simmering water. The eggs was already at room temperature so it didn't take long for it to get warm to the touch - as Rose suggested. Then beat the eggs mixture on high until it tripled in volume. Then sifted flour and fold until everything is well mixed. I have to admit that this time my arm got tired folding the flour in! It feels like forever until everything is mixed, and I was afraid that my slow arm caused the batter to lose volume and ended up destroying the cake. Well about 1/2 hour later, I found out that everything's fine. The cake turned out looking so nice that I had to take a picture of it. It did rose a bit in the center, but it became flat right away after I flip it out of the pan. 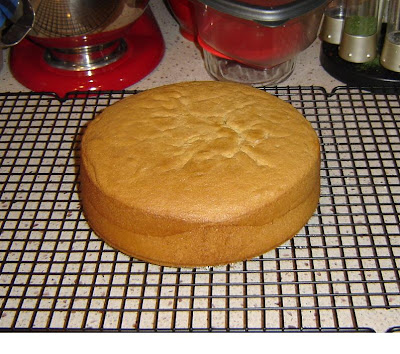 Oh did I also mention my kitchen smells like egg heaven when this cake is baking. YUM!

Rewind a little bit, while the cake was baking I made the leche mixture. I should've planned better and made this before I started the cake because it took about an hour for the the milk mixture to reduced by half. Once it's reduced, I added the heavy cream and condensed milk. After both the cake and the milk mixture cooled - I put the cake inside a small trash bag. I figured using a trash bag is easier then using 2 sheets of plastic wrap. I placed the cake back inside the cake pan, then poured the milk mixture over the cake. Then everything is refrigerated for 8 hours.

8 hours later...
I took the cake out of the fridge. Then lifted the trash bag. I've decided I was not about to attempt to flip this heavily soaked cake. I was too afraid that my hands would slip and the whole thing would be splattered all over the floor. So using a really long metal spatula, I lifted the middle of the cake a bit and pulled the trash bag away. It worked :)!

At this point it was already 8 PM. So I didn't bother with fancy decorations and just decorated the cake simply - like in the book. Here's the result. 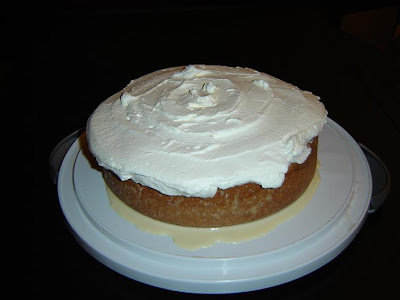 I found it funny that you can see some milk oozing out of the bottom of the cake. 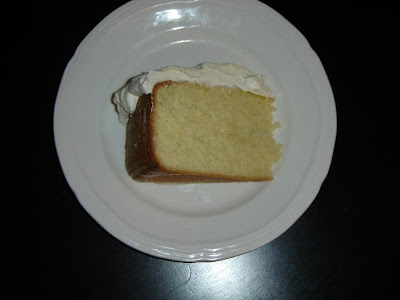 Tasting impressions: I love this cake and so did everyone. It's very moist (with all those milk) and lightly sweet. The taste is better than I had anticipated, so I was glad I made it :).
Posted by Jenn at 11:59 PM 5 comments: 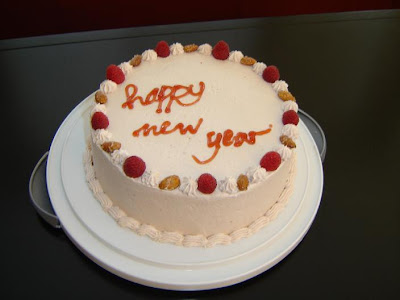 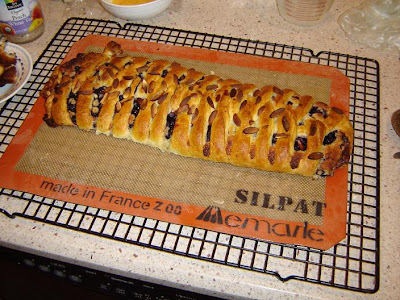 I made this Danish braid a couple of weeks ago. The danish dough recipe is from Rose’s PPB, the fillings are frangipane and frozen bluberries cooked with sugar. This dough is softer than the croissant dough so it feels easier to roll and handle. I really love working with laminated dough, I can’t really explain it, something about rolling the dough makes me feel happy. A couple of error I made: I didn’t notice that the danish braid requires only 1/2 of the danish dough recipe, I made the full batch so ended up with 2 danish braid. I filled the other one only with frangipane and forgot to take a picture of it. Also, I put too much frangipane in the dough, it leaked over during baking. Neither mistakes is a big lost - the danish taste heavenly and I will make it again.
Posted by Jenn at 11:55 AM No comments: