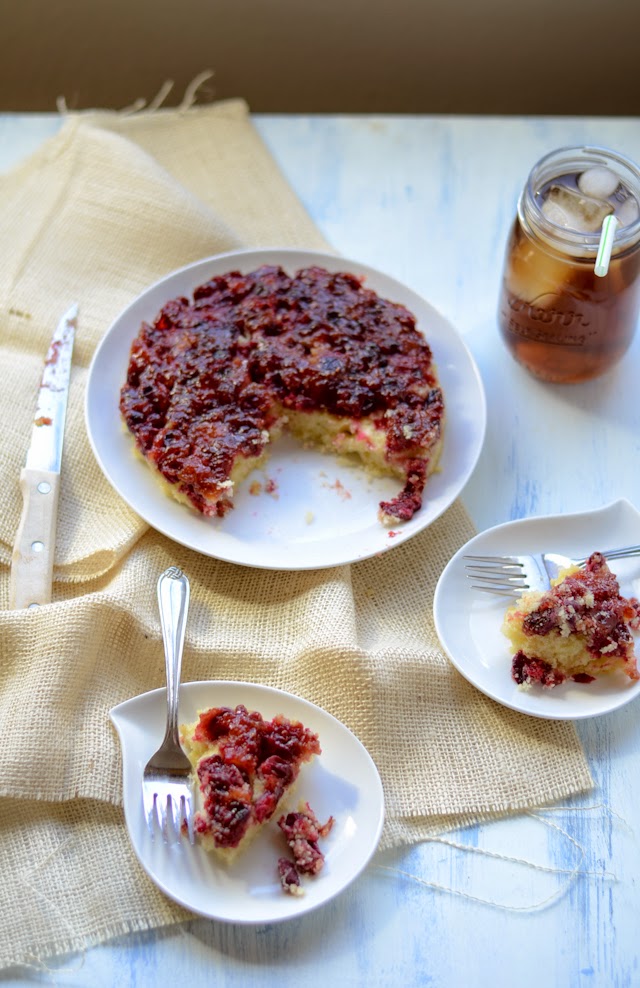 The easiest recipe so far from The Baking Bible. This cake took me less than 2 hours to make (1 hour 55 minutes to be exact). And that includes baking time.

This cake brings me back to Rose's Heavenly Cake days. It is a typical Rose's white butter cake with sour cream. It is also my favorite type of white butter cake because of the addition of sour cream. The sour cream makes the cake more moist. One of the issue I found with baking butter cakes here in Mile High city is it tends to make the cake drier and dry out faster. Since I like to keep any baked goods over several days and eat them a bit at a time, dry cakes = unhappy me.

There is not much to report about this cake. It came together very quickly and easily. I was a bit shocked to see the amount of sugar in the recipe - the sugar for the batter is the same weight as the flour. I was half expected to have a sweet cake that might be too sweet for my taste. However, this cake came out only slightly sweet and the tartness of the cranberries and the lemon juice in the caramel is what I taste. I almost want to say that it needs a bit more sugar but it was quite nice to have a slice of this yesterday with my ice tea.

I didn't adjust baking soda or baking powder since the recipe used so little of it already. A bit challenging to reduce 20% of 1/8 teaspoon :). I added 1 teaspoon of egg whites for liquid adjustment. I used a baking stone and pre heated the oven as instruction. The cake baked for 30 minutes and the cake tester came out clean but the batter hasn't browned at all. So I put it back into the oven for another 5 minutes, which turned out to be a mistake as the sides pulled away from the pan already - and still not brown. It is tasty though and pretty looking with all the cranberries. 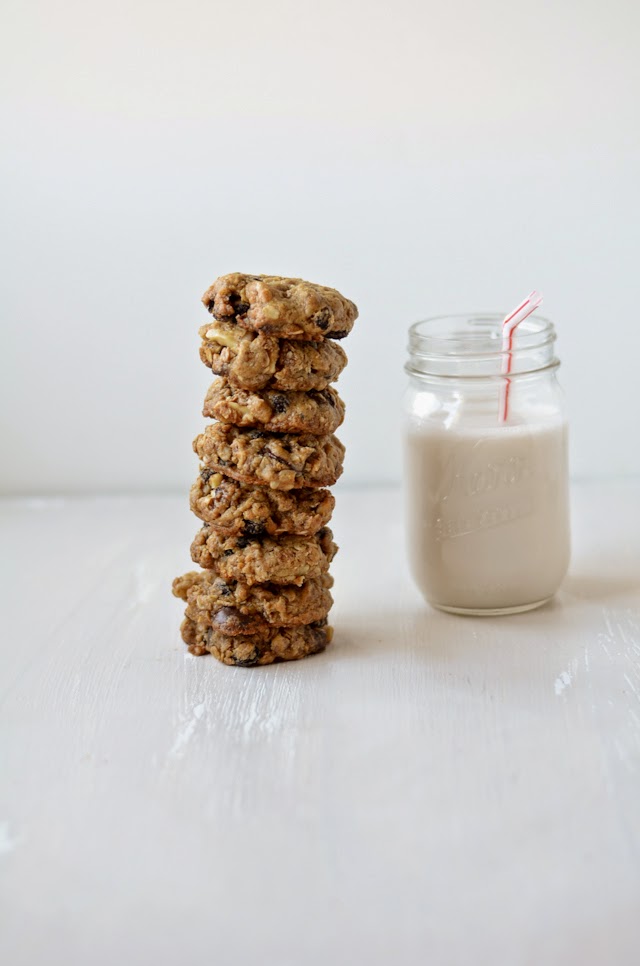 These cookies are very sturdy. Yes they are. Why do I say that? Sturdy is not really a word you would associate with cookies. And it's not a very good word. I would think that if someone refers to cookies as sturdy maybe it means they are hard like rock and therefore unedible.

These cookies are amazing. They are chewy and yummy and I would totally make them again and again.

They are sturdy because while I was trying to take photos of my leaning tower of cookies, they fell 8 times. 8 times! The bottom 2 cookies stayed put, the other 6 fell over and over again. 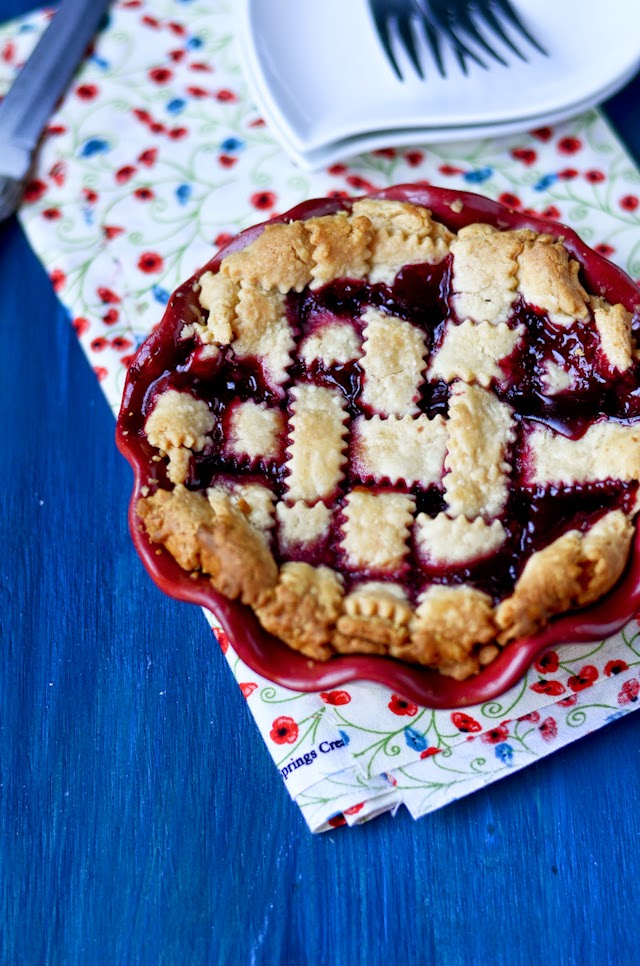 I am making 1/4 recipe of Cherries and Raspberries Pie instead of Sour Cherry Pie, made from frozen fruits. There are no fresh cherries this time of year. I know there is a variation in the book to use canned sour cherries but I dislike canned stuff and prefer to avoid using it, if possible. Somehow frozen feels better. There are fresh raspberries from California but it has the california price, ha! I have frozen raspberries in the freezer so I thought I add it to the pie to give it a more sour taste.

I wish we are making this pie in the summer instead of now. We have a cherry tree in our backyard that produced sour cherries. But it is only the middle of March now and the cherry tree is still hibernating, so we have to settle with frozen sweet cherries from the grocery store.

I love making these. Kinda funny to say that since I'm not a pie fan. Perhaps, like Marie have said, Rose will make a convert out of me. But I do have a strong bias towards any pretty dessert. Sometimes I feel I don't care much if I like the taste as long as it looks pretty for the pictures. I know this puts me in an odd category but I really don't care.

Doesn't the below picture makes you want to eat it!? :) 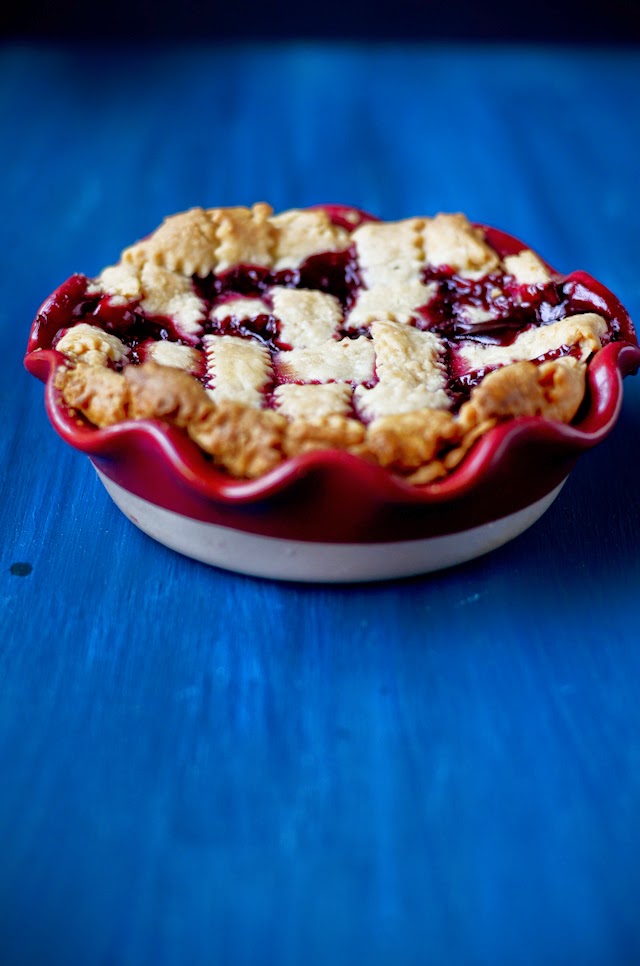 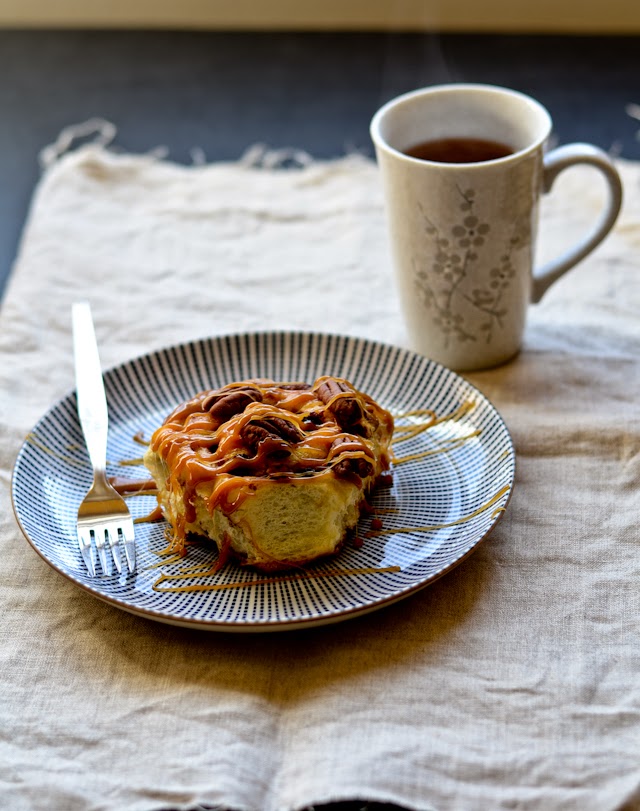 This is a redo of the caramel buns. I made another 1/2 recipe of the brioche and the caramel. The purpose is to try to redo the caramel. This time I paid attention and not suffering from ADD or KDD (knitting deficit disorder) or distracted with other things while the caramel is cooking. I had the heavy cream in the microwave ready to go. Even punched in 20 seconds on the microwave keypad thingy for the the cream, all I gotta do is press start. I have the butter soft, kitchen thermometer, pyrex cup sprayed with cooking spray, all next to me. Once the sugar mixture started turning a bit brown I stood watch, then heat up the cream, measure the temperature on the sugar mixture, it's 340'F - I took it off the heat (not just turn off the heat but actually moved the pot to the side - thought I'd clarify, having read earlier Michelle hilarious rendition of conversation with her husband). I poured the heavy cream onto the pot, it is bubbling super furiously (sorry no photo, tried to concentrate to much), put it back on the heat and mix until all is blended. Then poured into the pyrex cup and it's still liquid, no toffee in sight. The butter must be too soft because as soon as I add it to the caramel, it melts quick and won't blend (arrghh!) I then nuked the whole thing, probably too long because it then bubbled. When I add the vanilla it went nuts (first time seeing vanilla boiling....). And then onto cooling, well they still look liquid. I was still dancing hurrah, and then 15 seconds after adding them to onto all the buns, they are TOFFEE!!!!!!!!! what the hell?!?

I think next time (yes there's next time) I should just make the toffee caramel. At least I'm getting practice for Christmas cookie baking!

I am going to serve this with warning, please nuke it and eat at own risk. I am not gonna be held responsible for any damage to dentures.

Alpha Bakers is a group of bakers who are baking through The Baking Bible, Rose Levy Beranbaum's latest cookbook. Come check out the rest of the group at Rose's Alpha Bakers.

Click here for a full listing of all the recipes we are baking.
Posted by Jenn at 3:31 PM 2 comments: 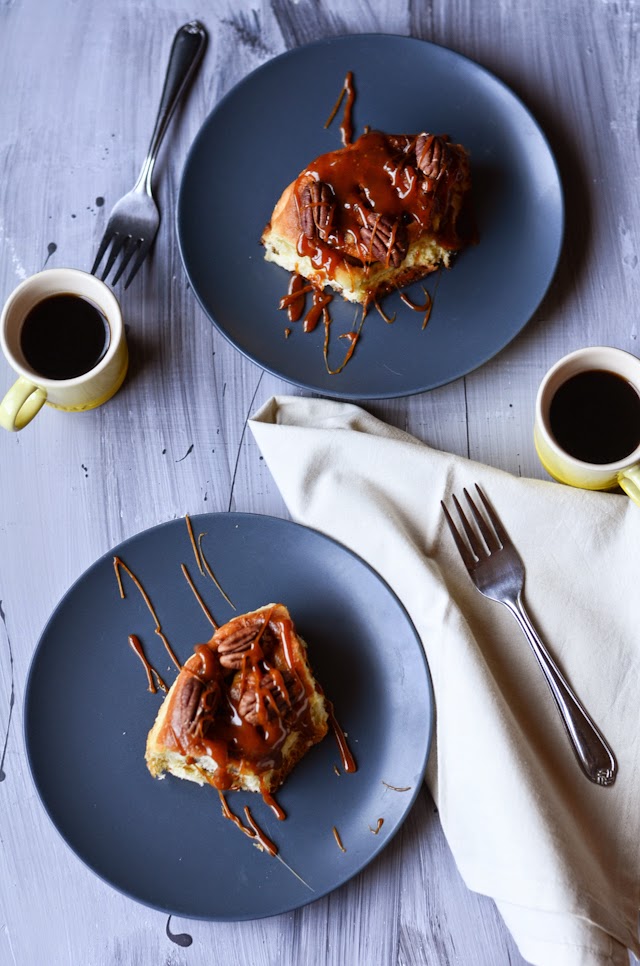 These are fantastic. They are better than anything I have ever had or have ever made. They are not too sweet, even with the caramel on top. The fillings taste wonderful - the rum-soaked raisins really adds to the taste.

I keep thinking we are making cinnamon rolls or cinnamon buns because of the photo on page 473. I've made cinnamon rolls several times and that photo reminds me of it (sans the mason jar in the middle). But no, we're making caramel buns, which is basically sticky buns, or a fancy cinnamon rolls is how I think of it. We first make a brioche a day ahead. Anything that uses brioche is fancy, especially Rose's brioche. It's airy and soft and has a very nice taste. I've made the version in Bread Bible several times in a loaf pan.

I never like sticky buns. They are also super sweet and hurts my teeth. But I love these so much. So now I can say: I only like RLB's sticky buns. 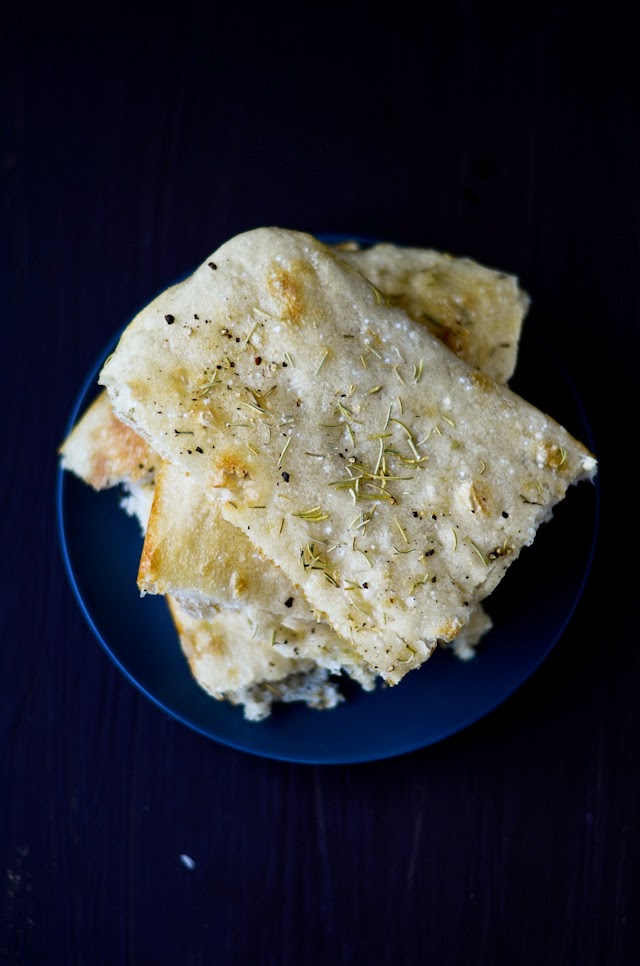 Oh dear, what have I gotten myself into...

In addition to baking through The Baking Bible, the Alpha Bakers decided to bake through The Bread Bible as well, with a once a month frequency. It took me about 5 minutes to decide to join. In that 5 minutes a lot of thoughts went through my head. Pros: I really want to improve my bread baking skills. I want to bake through The Bread Bible after Rose's Heavenly Cakes but lack motivation. This is my chance. Cons: I have already a lot of things going on. Can I really take on one more? My knitting is a tad neglected nowadays- which makes me sad sometimes. Now adding baking through the Bread Bible into the equation. Pros: I really want to do this and can't say no (this is not a legitimate reason, but it is according to that baking-loving-evil-voice in my head). Cons: Who's gonna eat it?

I am here now, which means the baking-loving-evil-voice won. As to who's gonna eat it, we'll eat some and give away some.

Glori said we are going to follow Marie's adventure and her schedule as a template. Reading through Marie's experience on making Rosemary Foccacia has me worried. Marie's first attempt at this bread didn't turn out. But then I take comfort in the fact that Marie is a super awesome baker now and has nailed recipes from various other books including Tartine Bread. Tartine Bread! I borrowed it once from the library, leafed through it and returned it promptly. It was too intimidating to even attempt.

I am not a big fan of foccacia. It always seem super oily in restaurants that I always feel like I'm eating oil. I have nothing against oil, especially olive oil, except I always thought if I'm gonna eat oil I might as well skip the bread. Why add carbs to it when I have to burn walk it off later. So my plan is to make 1/2 recipe and then take it to my local yarn store to share. 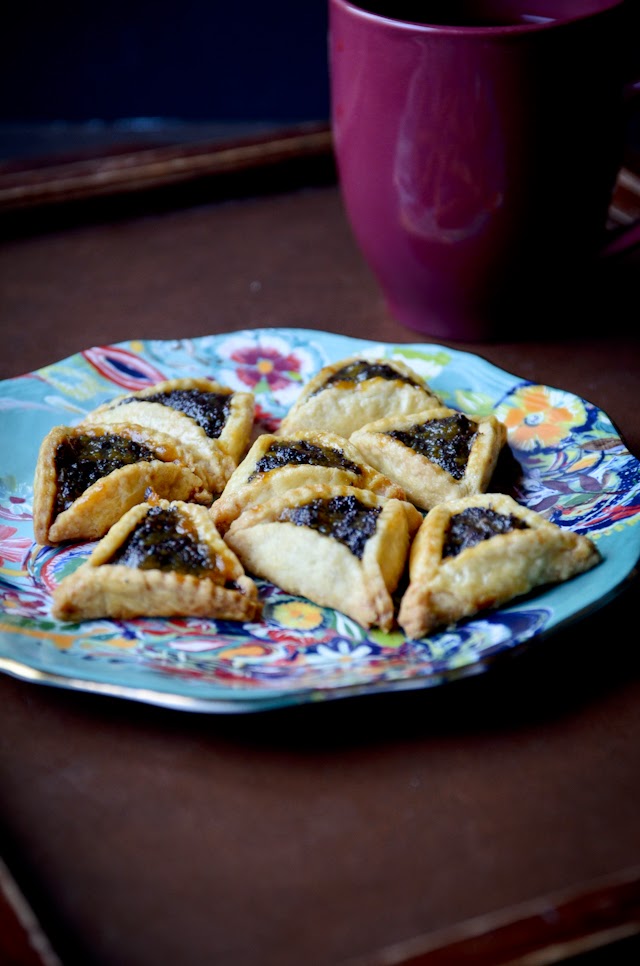 I was looking forward to this recipe. Not only this cookie has a story behind it, which I find very interesting, the main ingredient: poppy seeds, is banned in several countries.

According to Wikipedia, Hamantash, is a filled-pocket cookie in a triangular shape. The shape is formed by folding the 3 sides of a circular piece of dough, with a filling in the middle. Poppy seed is the oldest and most traditional filling, though you can substitute other "fruit" filling such as prunes, nut, date, apricot, raspberry, or fruit preserves. The name, Hamantash, is known as a reference to Haman, the villain of Purim. These pastries are supposed to symbolize the defeated enemy of the Jewish people, and resemble the three cornered hat of Haman. I am glad that Rose is exposing us to cookies like this one, cookies with a story behind it.

Onto the next interesting topic, did you know that poppy seeds is banned in Singapore and Saudi Arabia. I'm sure Faithy is substituting and probably is using her 3 year old lekvar from Rose's Heavenly Cakes bake-a-long. According to the Central Narcotics Bureau of Singapore, poppy seeds is banned because of its narcotics (morphine) content. In Saudi Arabia it is banned for various religious and drug reasons. In airports India, they advised folks not to carry poppy seeds to other countries as it can lead to false positives drug test result.

This leads me to wonder how much poppy seeds one has to consume to show a positive result in drug test. I am glad I am not doing drug test for a new job or a health assessment at the doctor's office any time soon. I would not want to have this on my record: "patient tested positive for morphine due to baking cookies containing poppy seeds for a baking club."