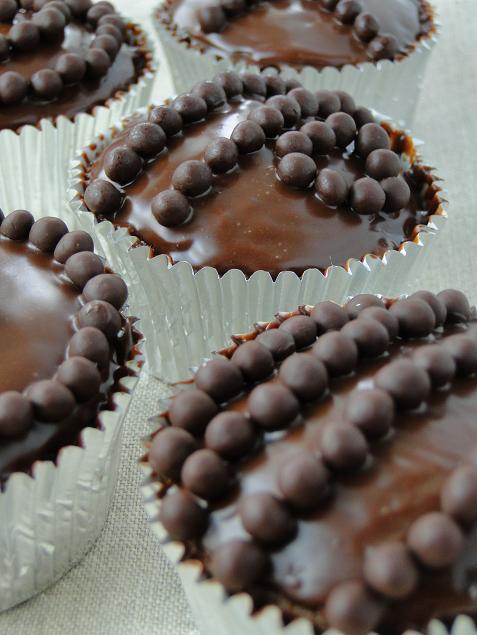 I was looking forward to making this cake. The name of this cake is just so cute and it looks so adorable, with its shiny glaze and flat top.

I was not, however, looking forward to it being the week after the chocolate banana cake. As much as I like chocolate, it is a little too much to have chocolate cake 2 weeks in a row.

The cake itself is really easy to do. Mix the cocoa powder with boiling water. Once it's cooled to room temperature, mix in the egg yolks and oil and mix until it resembled buttercream. Next, add all the dry ingredients in 2 batches. Finally, mix in the egg whites.

I tried to divide the batter equally between 14 cupcakes. First I distributed 25 grams to each cupcake liner, but then I still had leftover batter. In the end I think I ended up with 29 grams. 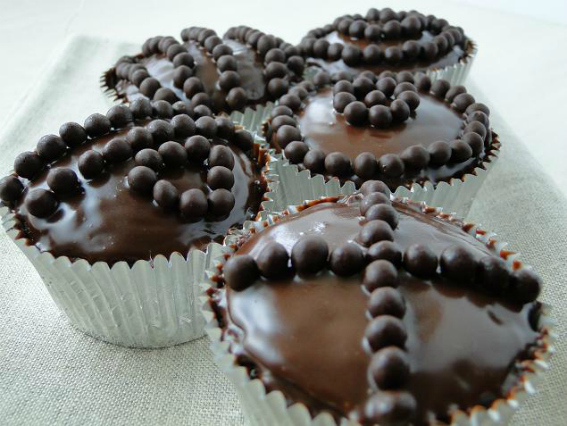 Once the cupcake baked, I poked holes all over with a wooden skewer, then applied the syrup. I don't know if any of the HCB bakers managed to use up all the syrup. I couldn't. Even after 3 application, I ended up with a puddle of ganache on top of the cupcakes. Somehow they were not being absorbed very well so I gave up. I had a little leftover ganache, which is now happily sitting in the freezer, accompanying the leftover ganache from the chocolate banana stud cake last week. I'm gonna have to figure out a way to use these 2 little leftovers, perhaps I can get creative with the chocolate featherbed cake, coming up in 3 weeks...

With all the ganache on top of the cupcakes, looking almost as shiny as a lacquer glaze, I made an executive decision right there and then to skip the lacquer glaze. Plus I have these chocolate pearls from Whole Foods that I wanted to use, and as Rose mentioned in the book, I should put them on while the ganache is still wet. 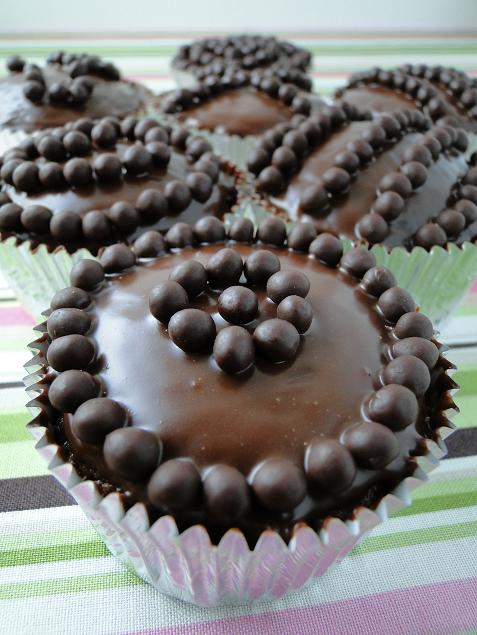 I got a little carried away with the decoration, not sure of what pattern to do, so I ended up with multiple ones. I really like the swirls so there are a few with those. And for fun, there's an "I love you" one. See if you can spot it, :). 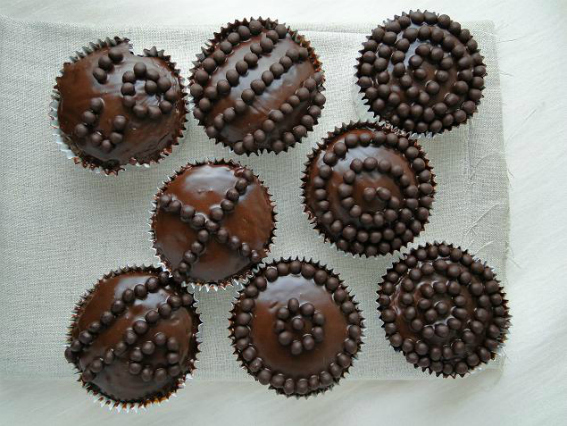 Tasting impression:
YUM! It is so good. I was so glad I reduced the sugar in the cupcakes by 25 grams, the sweetness level is good. The chocolate pearls has a little crunch (it has crunchy cereal in the ingredients). I like the texture of the pearls with the cake.
Posted by Jenn at 7:21 PM 20 comments: 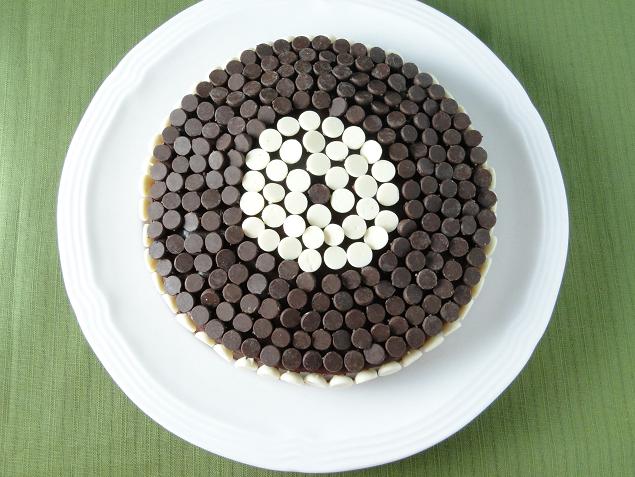 I was really looking forward to this cake. So much so that I started ripening the banana 5 weeks ago. This being the summer season, the banana started turning black on week 3, so I put it in the freezer.

This prompted a funny conversation with J.
J: there's a banana in the freezer, is that okay?
Jenn: yes, that's okay. It's for the banana bread.
A week passes by...
J: there's a banana in the freezer (I guess he forgot the conversation last week :))
Jenn: that's for the banana bread.
On baking day... the frozen banana is on the counter top...
J: that banana doesn't look good. are you sure it's okay to use frozen banana?
Jenn: yes, I'm sure. I've asked some people on the club and they say it should be okay.
Jenn peeling the banana and weighing it on the scale...
Jenn: this banana is gross.
J: maybe that's not a good idea.
Jenn: but that's what we're supposed to use.

I continued on with the recipe, processed the "gross" (LOL) banana with the sour cream in the food processor. Then incorporated half the water cocoa mixture that I already made 1/2 hour ago into the banana.
Then mix all the dry ingredients in the KA mixer, incorporated the eggs vanilla mixture, the remainder of the cocoa mixture, and finally the banana mixture.
(I'm typing this from memory so I hope I got the order right :). Someone please tell me if I messed it up!).

I poured the batter into the prepared 7 inch pan. Heavenly smell came up - and I swear I thought I was gonna faint. Ripe banana smell and yummy chocolate. It smells like banana split! And... dipping my finger into the batter for a taste, it taste pretty darn close to banana split!!!

I think this put to rest the discussion about whether or not it's a good idea use frozen banana, ^_^.

Once the cake is in the oven, I started making the ganache. I chopped the chocolate into little bits, and mix it by hand with the scalded cream. No need for food processor. For once, I left the ganache to set at room temperature without an ice bath. The cake baked in 25 minutes and I let it cool on the rack. 40 minutes later, the cake cooled and the ganache is still a little too runny. I started decorating anyway. Mostly because I was impatient, but then I thought that it was easier to spread the ganache at this consistency. At least on the top of the cake, on the sides I created a mess. Then I refrigerated the cake for a little bit to set the ganache. By this time the rest of the ganache in the bowl are more frosting-like, and I finished smoothing the rest of the cake.

We haven't tried the cake. I know that's a crazy idea. I'll have a piece later today and report back on taste result :). If it taste as good as it smells then it will be FABULOUS!!!

Tasting impressions:
Finally had the piece of cake. The banana taste was more noticeable than I originally thought, but that’s also because I was intensely eating it and trying to distinguish the banana flavor. J liked the cake but he said he didn’t notice the banana flavor. 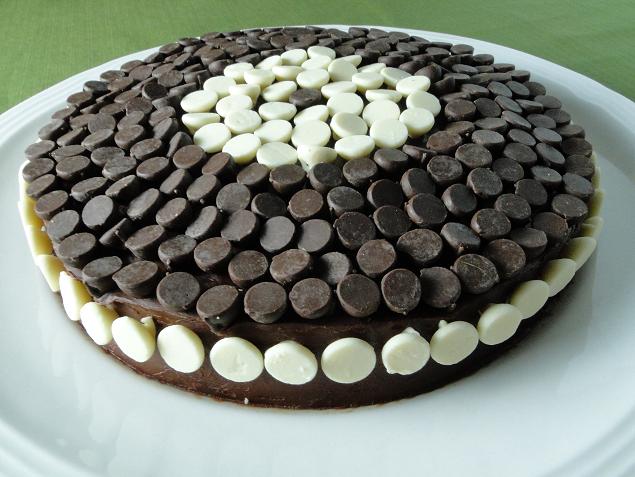 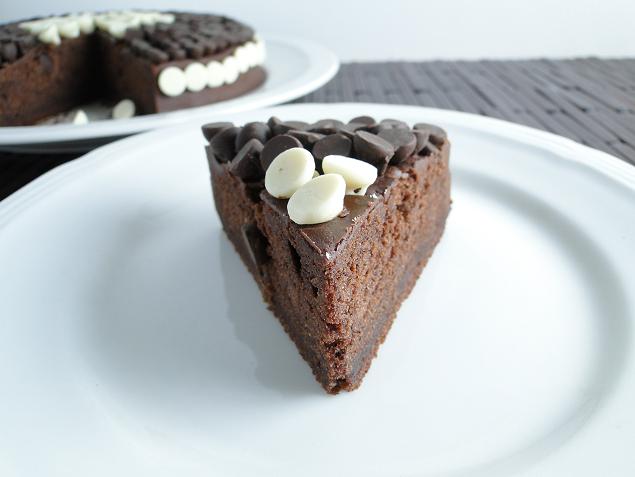 I made Genoise Classique last weekend - recipe from The Cake Bible. Initially, I split the recipe in half and baked in a 7 inch pan. The genoise turned out so beautifully - not disasterously as it was a couple of weeks ago - that I couldn't resist baking another half recipe. 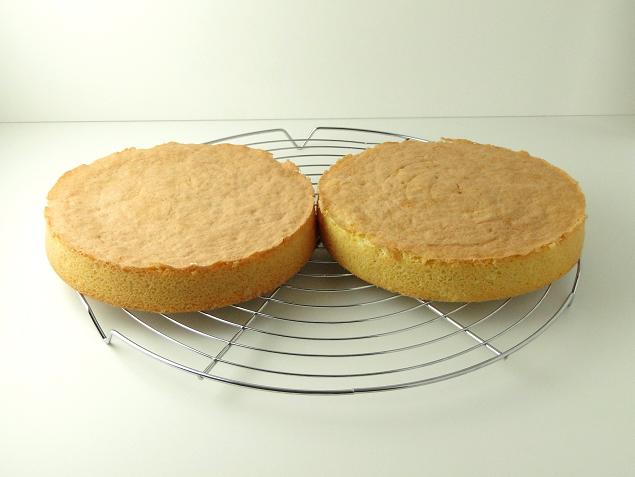 Well, no such thing happened this time. When I mix it with the egg, no bubbling or any strange reaction happened. They blend together like they are meant to be! 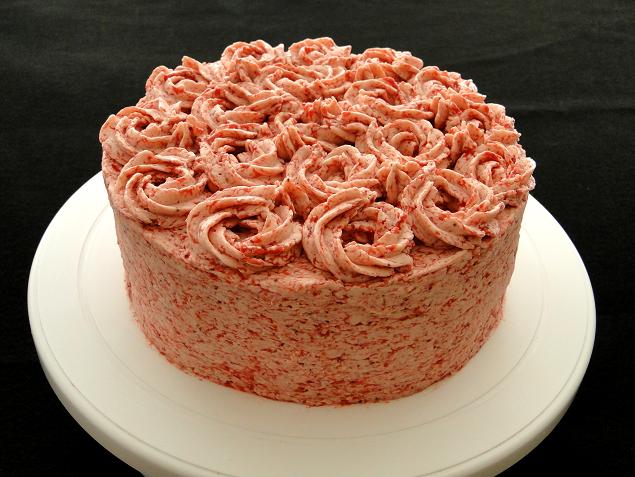 Mousseline is my favorite buttercream so far. I love the taste, it's so light I don't feel I'm eating a stick of butter. And I thought since I've made it several times, I got it down. This is what happened people, when you got comfortable and you thought nothing will go wrong. You get failed mousseline. It didn't turn out to be silky smooth but grainy.

I've never made mousseline in the summer, so I am blaming the hot weather. Somehow baking and hot weather doesn't work for me. Maybe I should just stick to cooking for now and taking pictures with the new camera LOL!

Though it's not a success, I tried to decorate the cake. I was grateful that the buttercream hold it's shape and it tasted good. The grainy-ness is not noticeable when we eat it, it just looks funny. We ate half the cake already. It is flavored with strawberry sauce recipe from The Cake Bible as well and boy oh boy, I can tell you the strawberry sauce is a killer! 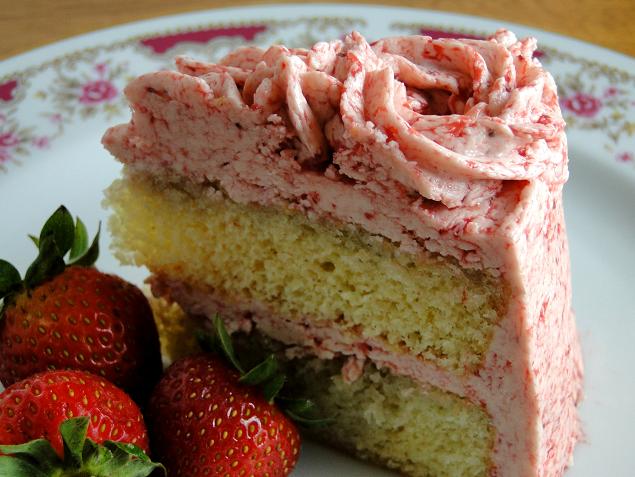 I just got a new camera and I can't put it down! Well okay, that's not really true. But it is making me want to take pictures of every food.

When the camera arrived, the only picture-worthy food in the house were bananas. 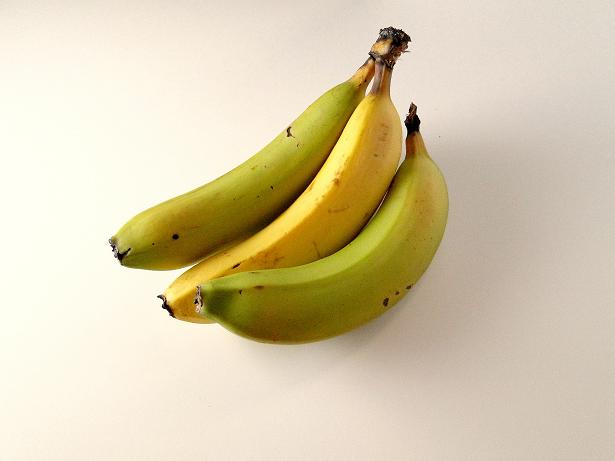 Yes, I know, not a very exciting group of bananas.

So then I went grocery shopping and whipped up some yummy dishes. 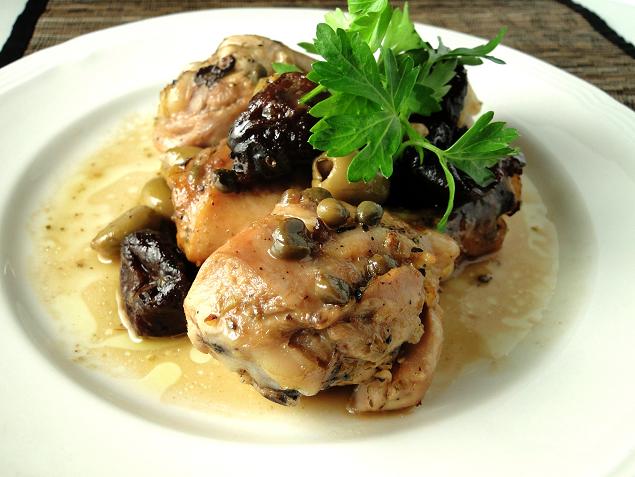 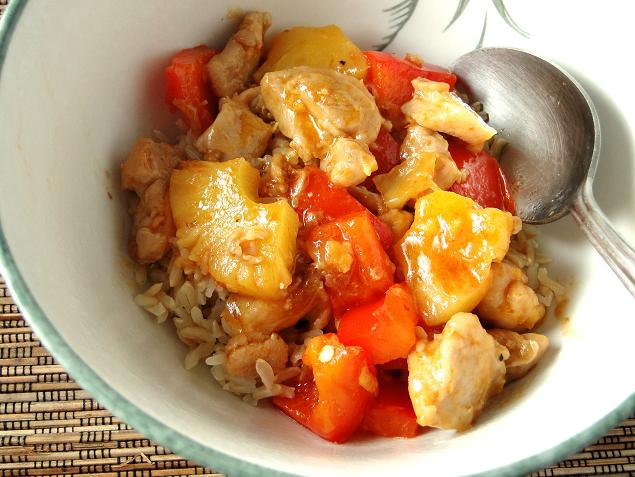 Those are Chicken Marbella and Sweet & Sour Chicken. They are from SimplyRecipes.com. I've been trying their recipes a lot lately and have been loving each dish.
Posted by Jenn at 6:46 PM 7 comments: 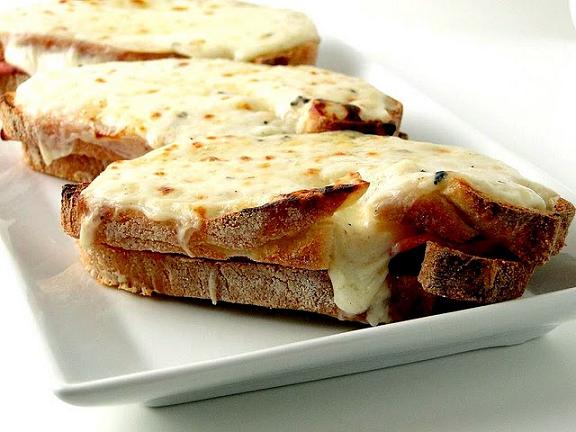 One of my favorite lunch item, Ina Garten's Croque Monsieur. It is super easy to make, takes 10 minutes of prep works, then 25 minutes in the oven. And voila, you have a restaurant quality lunch.

I'm not sure if I can post the recipe here without getting into trouble. I think I'll better play it safe and tell you that you can find the recipe on Food Network, just type in Croque Monsieur and it's one of the 1st search result.

Click here to go to the recipe on Food Network's website.
Posted by Jenn at 2:24 PM 10 comments: 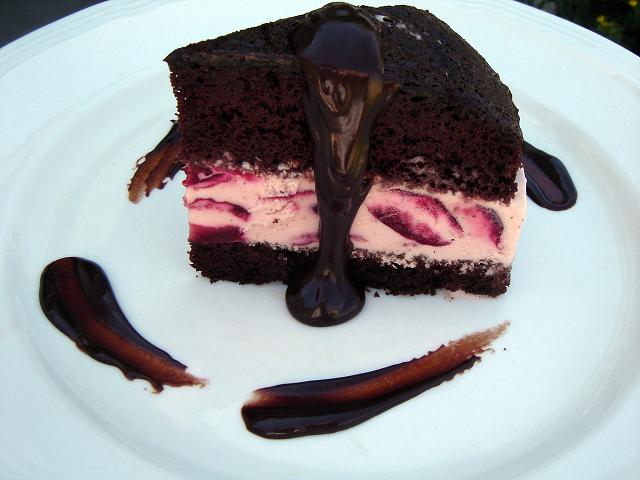 It is very rare that I met an ice cream flavor that I don't like. And I've made the German Chocolate Cake before and love it. So it's a no-brainer that this cake will be a hit.

I made the ice cream on Saturday. At first I was going for a strawberry ice cream, but I changed my mind when I saw cherries at the grocery store. So vanilla cherry ice cream it is.

I used Rose's vanilla ice cream from The Cake Bible, and incorporated the cherry part from a bing cherry ice cream recipe from Williams Sonoma's website.

As I was prepping the batter for the German Chocolate cake yesterday, it hit me that I'm a bit nervous. With the way my baking luck has been lately, I wondered if this cake will be messed up too. Panicked and worried, I read and re-read the recipe several times and checked my ingredients to make sure that everything will go well.

The Chocolate cake recipe is split into half and the batter is enough to fill the pan about halfway, with a little leftover batter for 1 small cupcake - for testing (thanks to Hanaa for this idea :)). 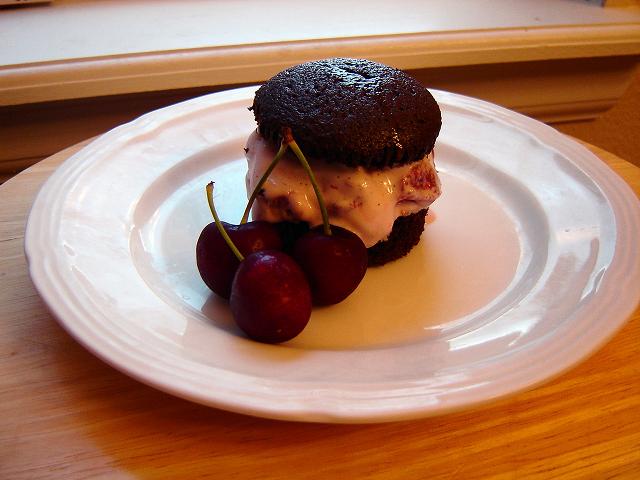 Tasting impression: YUMMMM!!! Homemade ice cream is the best. And Rose's recipe is definitely a winner. I forgot to reduce the amount of vanilla in the ice cream, so it taste more like vanilla ice cream with cherry chunks. But combined with the chocolate cake it taste completely superb!
Posted by Jenn at 2:50 PM 13 comments: