I had some free time this weekend, so I thought I'd play catch up on the cakes I've missed. Here is Spice (Cup)Cakes with Peanut Buttercream. 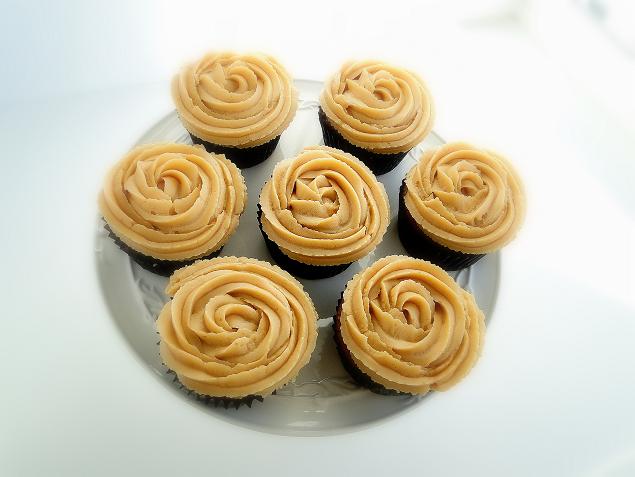 As usual, I made 1/2 recipes and felt like making cupcakes. By the way, I'm beginning to think that I am developing an addiction to cupcake shapes. A few months go by and I haven't made cupcake and I would miss it.

This cake is super easy to make. The hardest part about it is sifting all the dry ingredients. I'm not a big fan of sifting, but it's not a step that I'd dare skipping. As I was prepping the ingredients, I thought of Hanaa. Why? Because Hanaa is one HCB who loves to add spices to her cakes, and this cake has both cinnamon and cloves. A quick search on her blog, and I found that she's made this cake back in September, and added ground nutmeg, ginger, and all spice. Hanaa, I wish I have your courage of playing with spices in cakes.

The buttercream is also super easy. At first I was dreading it when I read this cake uses buttercream. I haven't made buttercream for a while, and the last couple times I made mousseline, they curdled. No chance of that happening with this one. Nothing could be easier than having to combine all the ingredients in a food processor.

Since the cake was so easy, I thought I had a bit of fun decorating it. 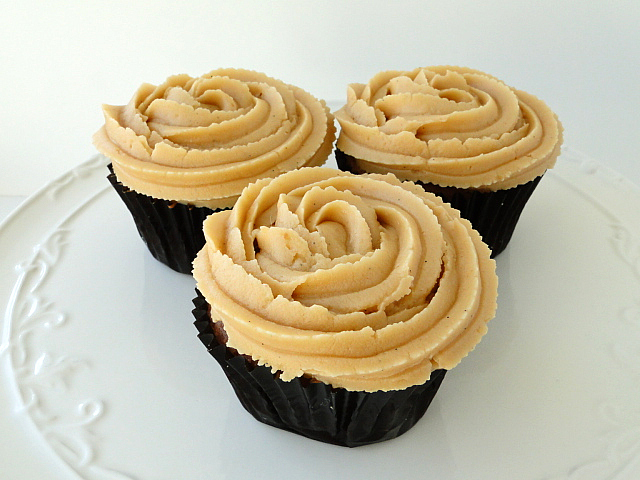 Tasting impression:
The cake is really good, soft, tender, and light. The buttercream I am not so sure of. I like the peanut flavor but combined with the cream cheese and butter, it taste too creamy. After I ate one, I feel like I would not be hungry for hours. I know it's my fault, 1/2 recipe of cupcakes to 1 recipe of buttercream. It is not an even distribution. But even if it's 1:1, I am not sure I like the taste combo very much. 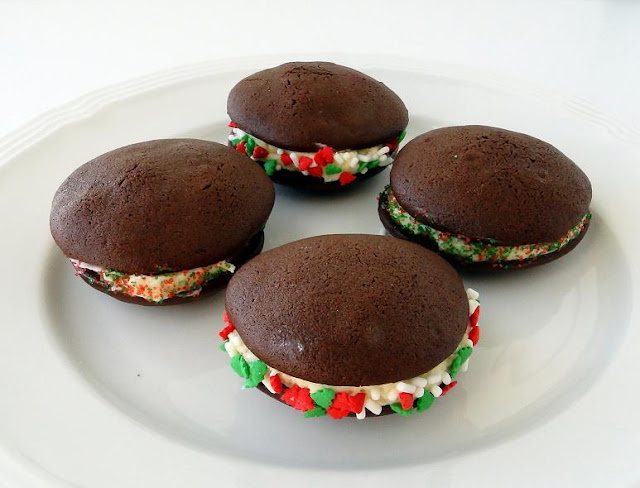 For this recipe, I made the buttercream first. Rose said in the book that once you're done, to congratulate yourself for making the perfect buttercream. Somehow that makes me think that this buttercream must be hard. True enough, somewhere she said it's similar to mousseline. Uh oh. So I made it first, thinking that if it didn't turn out, then I wouldn't even bother to make the whoopie cakes.

It all started out so well. I combined the sugar, water, and corn syrup over low heat until the sugar dissolved and the mixture started bubbling. Took it off the heat and proceeded to beat the egg whites with a hand mixer. Added cream of tartar and beat until stiff peaks. Put the sugar mixture back on the heat and boil until it reached 248 degrees. Then poured it onto the egg whites while mixing. Btw, is it just me or is it always fascinating to see egg whites change texture into the smooth, shiny, and silky meringue.

Once the meringue is cooled, Rose tells you to beat butter and powdered sugar until it's smooth, creamy, and white. Added the meringue and this is the part where I messed it up. Rose said to beat for 10 seconds until combined. I beat a bit too long, about 30 seconds, and the cream curdled a bit.

Taste fine so I made the pies.

I remembered from reading all the HCB who made this that the pie turned out so big. Keeping that in mind, I measured 20 grams (instead of the 40-something grams per instruction).

I think it's still too big. I'd prefer to make this somewhat bite size, as in, I can eat it in a couple of bites. So maybe next time I would try 15 grams. 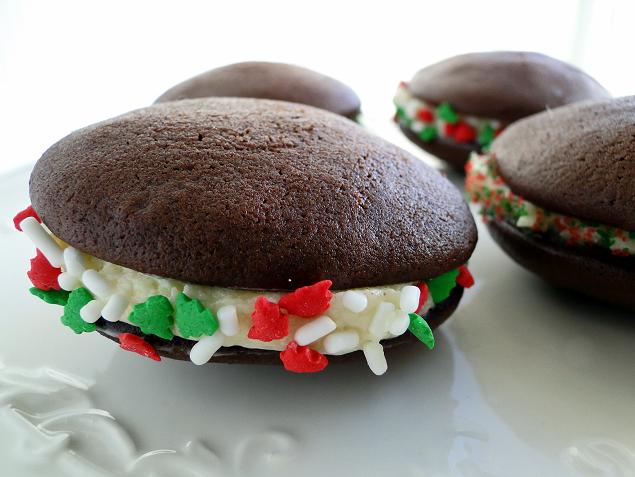 Tasting impressions:
Yum!  It is so good. The marshmallow cream is super yummy and combined with the pies it is awesome. As I am typing this sentence I took the last bite of the one pictured about (with all the Xmas tree sugar around it). I am still not hungry from the Spice cupcakes 2 hours ago, but I gotta have a whoopie pie! (I think tonight's dinner will be a very small salad...)
Posted by Jenn at 6:54 PM